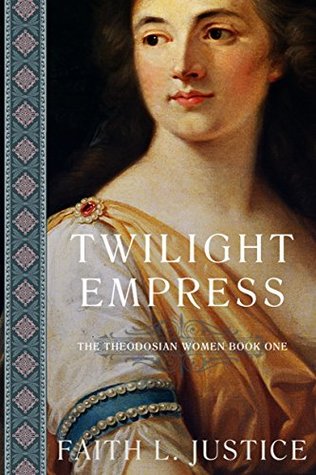 Placidia put the parchment down, closed her eyes, and rubbed her temples in a futile attempt to ease her headache. She had had little sleep the night before, and less to eat, as she worked with the city elders to avert this most recent crisis. With the Visigoths at the gates of Rome for the third time in three years, the city was exhausted—little food, few defenders, and no hope of rescue from the Imperial Court, which was safe behind the protecting marshes of Ravenna. At twenty-two, she should have been safely married, raising children; not picking up the pieces of an empire dropped from the careless hands of her half-brother, the Emperor Honorius.

The urgency in Paulus’ gruff voice drove all tiredness from her body. Nothing chilled her blood as much as the cry of ‘treason.’ The word summoned unwanted images of her adopted sister Serena, struggling against the executioner’s garrote, and Serena’s husband Stilicho’s head on a pike. The unwarranted death of the two people who raised her had precipitated her flight from the Ravenna court and her estrangement from her brother.

Placidia took a deep breath and steadied her hands.

“What treason?” She managed a calm voice despite her racing heart.

“Someone opened the Salarian Gate. The barbarians are in the streets. We must flee to safety.”

Placidia chewed her lower lip, rapidly forming and discarding options to save her household. There were rules to sacking a city, and Placidia hoped King Alaric would abide by them. One of those rules provided sanctuary in Christian churches. The Gothic King was purportedly a devout Christian, if of the Arian heresy.

“What are your orders, Mistress?” The light of battle gleamed in Paulus’ eyes. A Vandal soldier wounded in Stilicho’s service, he had been with her since she was a child.

“Deploy my personal guards at the bottom of the hill. Take the rest of the servants to the Basilica of St. Peter immediately and claim sanctuary. I’ll come with the guards as soon as I destroy these documents.”

Placidia grabbed the nearest of several piles of parchment—letters of support; reports on food and supplies throughout the Empire—and laid them in an unlit bronze brazier. She would give the enemy no helpful information. Her hands trembled as she poured oil on the papers and lit them from her lamp. Smoke curled from the parchment, irritating her eyes.

“I’ll send the servants away, Princess, but do not ask me to leave you alone. I’ve seen my share of sacked cities.”

“I want you to go with the servants, Paulus.”

His face set in a familiar stubborn cast.

“I don’t have time to argue. What can a crippled old man do here?”

The stubborn look gave way to one of hurt pride.

Placidia softened her tone. “I have lost all whom I love in the past two years. The man and woman who were more to me than father and mother, my cousins, my…betrothed.” Her voice caught. “I have no wish to lose the one person left from my past. I care for you, my friend, and want to see you safe.”

“Do you think I care less for you?” Paulus’ eyes glittered with unshed tears. “You are the last of my lord’s household. I am bound to you by oath and blood.”

Screams echoed down the colonnade, accompanied by splintering wood and crashing crockery. Placidia froze like a rabbit before a snake. My people are lost. The raiders must have ridden hard and fast to get to the palace so soon.

Paulus grabbed the small knife Placidia used to break the wax seals on her letters, and rushed toward the door. “Come, Princess, we will go to the oratory. Perhaps they will honor sanctuary there.”

Placidia shook her head. “If King Alaric wants me dead, the chapel won’t shelter me. If he wants me alive, perhaps I can extend that privilege to my household by being bold rather than timid.”

A scream, choked off in the middle, sent Paulus through the door at a limping run. Placidia piled the rest of the papers onto the blaze and dashed out after him.

She faltered at the scene. Normally, the central garden with its splashing nymphaeum was a soothing refuge from the heat of the August sun. Now a cadre of at least fifty Gothic warriors systematically herded the palace servants into the leafy refuge, releasing the scent of lavender and rosemary as their leather-clad feet trampled herbs and flowers. They used the flats of their swords, sometimes striking a lagging slave, to push them into a tight knot of gibbering humanity.

Unlike the wildly varying dress and armor of most barbarian warriors, these wore more or less matching knee-length green tunics trimmed with scarlet at the neck and hem. Most also sported mail shirts and Roman-style helmets—rare, these days, even among Roman troops.

At least King Alaric sent an elite corps to take me.

One warrior spied her under the colonnade and rushed forward, grinning.

Paulus jumped in front of the man, threatening him with the letter knife. “Don’t touch her! She’s the…”

The barbarian brushed the knife aside with a sweep of his arm and struck Paulus with the silvered hilt of his sword.

The old man sank to the ground, senseless or dead, a large gash bleeding profusely on his forehead.

Placidia stalked into the garden, back rigid, face pale.

“Stop at once!” Her voice pierced the scene, turning it momentarily into a tableau.

The advancing warrior bared his teeth and said, in execrable Latin, “Roman woman not a mouse—more my liking.”

“Leave her, Berig.” A commanding voice rose from among the warriors.

A red-haired barbarian muscled his way through the pack. She had not seen him because he stood half a head shorter than most of his companions. He looked her over speculatively.

“You have the bearing of a royal, if not the accouterments.” He motioned to the slaves nearest them. “Is this your mistress?”

To their credit, they all looked to Placidia before answering. She nodded permission.

Watching the by-play, the warrior said, “I commend you on your servants, Princess. They are most loyal.” He smiled, showing white, even teeth in a tanned face framed by a red beard. Lines gathered at the corners of his green eyes. “I am Ataulf, General and Master of King Alaric’s cavalry.”

The Gothic King honors me by sending his heir and second-in-command. “General.” Placidia drew her slender form into a commanding pose. “Have these…men…vacate my residence at once.”

“We will leave shortly, Princess. King Alaric sent me to escort you to our camp. You are to be the guest of the King and the Gothic people.”

“Do not pretty the package, sir. I am a hostage. For what other reason would you force me from my home?” She waved her right arm in a sweeping arc. “You strip Rome and seek to squeeze additional treasure from my brother.”

His hesitation hinted at deeper motives for her detainment. Perhaps Alaric wished more than gold from her estranged brother. And little will he get—gold or otherwise—from that lack-wit.