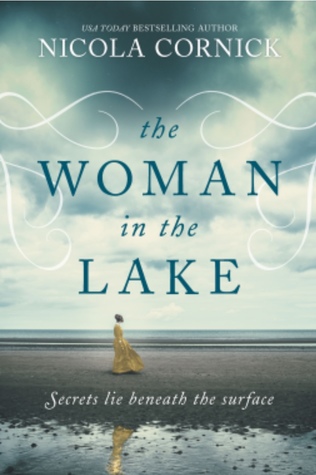 ‘I see it all again: the silver moon swimming beneath the water and the golden gown billowing out about her…’

1765: Lady Isabella Gerard asks her maid to take her new golden gown and destroy it. Its shimmering beauty has been tainted by the actions of her husband the night before.

Three months later: Lord Eustace Gerard stands beside the lake looking down at the woman in the golden gown. As the body slowly rolls over to reveal her face, it’s clear this is not his intended victim…​

1996: Fenella Brightwell steals a stunning gown from a stately home. Twenty years later and reeling from the end of an abusive marriage, she wonders if it has cursed her all this time. Now she’s determined to discover the history behind the beautiful golden dress…

Generally, I don’t enjoy split timelines. They don’t do very much for me except give me a headache not to mention, I find that sometimes they are poorly written or that the one character is lackluster in comparison to another and makes for a dreary experience.

However, in this time, we have three narrators and two of them are in the eighteenth century, Lady Isabella and her maid, Constance, whilst Fenella is in today’s time period save for a flashback to the 90’s. I rather enjoyed each of their narratives, though I admit Isabella was my favorite. Trapped in an unhappy and violent marriage, Isabella is at her wits end. Constance, who has secrets of her own, works for the lady but is actually spying upon her for her husband. Fenella, in the modern period, is dealing with the aftermath of her marriage and the loss of her grandmother.

All three of them have one thing in common–a golden gown that was meant for Isabella. However…there is far more to the gown than anyone anticipated.

At first, I wasn’t sure how they were going to tie together but amazingly, they do and they do so seamlessly. (No pun intended!) The way Ms. Cornick brought it together was brilliant, dropping little hints here and there so that you would experience that ‘aha!’ moment. I liked the parallels between the three women as well and their story with Fen’s life. It was seriously quite brilliant how they all tied in together.

I thoroughly enjoyed this story and how one dress could really bring this rich cast of characters together. Even though, as I said, I dislike split storylines, this one is tolerable since it works to be a full, cohesive story. The characters are lovely and fun; not fully knowing their true motives made it enjoyable. I’d have liked them fleshed out a little more–I couldn’t quite picture each person as the descriptions were sort of vague–but perhaps that is the intent; to let us wonder who they are. And I’d have adored more description to the locales but still, a fun read.

I also thought the momentary time slips were a great deal of fun to read. A little offputting–I’d definitely be scared if I saw things in another time or was transported to another time!–but I loved those moments.

I think if you enjoy Outlander or the series A Discovery of Witches, you’ll more than likely enjoy this book.

International bestselling author Nicola Cornick writes romantic historical mysteries and witty and passionate Regency romance. She studied History at London and Oxford and was awarded a distinction for her dissertation on historical heroes. It was a tough study but someone had to do it. Nicola has a “double life” as a writer and guide at the stunning 17th century hunting lodge, Ashdown House.

Nicola lives near Oxford and loves reading, writing, history, music, wildlife, travel and walking her dog. She also loves hearing from her readers and chatting to them on her blog at www.nicolacornick.co.uk She can also be found on Facebook and Twitter @NicolaCornick

From acclaimed author Karen Brooks comes this intriguing novel rich in historical detail and drama as it tells the unforgettable story of Queen Elizabeth’s daring, ruthless spymaster and his female protégée.

In Queen Elizabeth’s England, where no one can be trusted and secrets are currency, one woman stands without fear.

Mallory Bright is the only daughter of London’s most ingenious locksmith. She has apprenticed with her father since childhood, and there is no lock too elaborate for her to crack. After scandal destroys her reputation, Mallory has returned to her father’s home and lives almost as a recluse, ignoring the whispers and gossip of their neighbors. But Sir Francis Walsingham, Queen Elizabeth’s spymaster and a frequent client of Mallory’s father, draws her into his world of danger and deception. For the locksmith’s daughter is not only good at cracking locks, she also has a talent for codes, spycraft, and intrigue. With Mallory by Sir Francis’s side, no scheme in England or abroad is safe from discovery.

But Mallory’s loyalty wavers when she witnesses the brutal and bloody public execution of three Jesuit priests and realizes the human cost of her espionage. And later, when she discovers the identity of a Catholic spy and a conspiracy that threatens the kingdom, she is forced to choose between her country and her heart.

Once Sir Francis’s greatest asset, Mallory is fast becoming his worst threat—and there is only one way the Queen’s master spy deals with his enemies…

I was so excited to read this book when I first heard about it and even more delighted when I was approved for an ARC. Apparently, this was published under a different publisher, but William Morrow picked it up. However it happened, here we are! Karen Brooks is a new author to me but one who will always be on my radar now. She’s an excellent writer, weaving a truly fascinating and heavy read. But don’t fret–the heaviness I speak of is a good one–this book is almost 600 pages! Yet, it’s a story that will stay with you and draws you in right away.

Mallory Bright is a brilliant narrator. She’s a young woman who has sullied her reputation–and thus by extension, her family’s, as well–but fortune seemingly shines upon the Locksmith’s Daughter. Where other women would bear the brunt of their shame, Mallory is given the chance of a lifetime.

However, it is one full of intrigue, danger and comes with consequences that Mallory had no way of foreseeing she would ever be part of. In an era where there are Catholic plots to set Mary Stuart of Scotland upon Elizabeth Tudor’s thrones, Mallory learns quickly that her actions have far-reaching and devastating consequences. But for Queen and country, is she willing to take that step? Redemption is something she longs for but is it worth the cost?

I was absolutely over the moon to see a book where ample time would be dedicated to Sir Francis Walsingham, Queen Elizabeth’s spymaster. As a historical figure, he is seldom appreciated for all of his efforts to keep Queen and Country safe. He is an interesting figure and I loved getting to read about him and the lengths he went to in order to achieve his means.

This was well researched and quite frankly, one of the best reads I’ve had in ages. Each character, be they fictional or a real figure, jumps off the pages and is amazingly vibrant. The scenery is also presented in an unflinching way, so you’ll be able to truly envision the sights and smells. I also appreciated the usage of Elizabethan era terms and actions. I truly stepped back in time!

A wonderful and amazing novel. I couldn’t put it down. Bravo!

I’m going to begin by saying that I was kind of dreading this one given that I absolutely loathed the one about Anne Boleyn. I suppose I’m biased, given how much I like Anne. I feel as though history paints her as “the whore” but we need to remember that Henry was the king. Women back then didn’t get much of a say in how things went. But let us not dwell on semantics. I could get legnthy.

Regardless, here we go!

I actually came away liking Jane a bit more after having read this. Weir brings us an imagined version of Jane as to why she didn’t marry earlier–she wanted to be a nun. Whilst we have no way in knowing why in reality Jane didn’t marry earlier, it was an interesting take upon it. One wonders if that is the truth or if she really was plain and had trouble finding someone willing. Her family wasn’t in the poorhouse, so it would seem peculiar that a woman of good stock and was of marrying age wasn’t married. Not to mention her younger sister married before her.

The book, of course, introduces us to the entire Seymour clan and brings us to Wulfhall (Wolf Hall for Hilary Mantel fans) leading us though Jane’s life, the history of the family, their joys and sorrows..it’s a lively take on the family life and it’s interesting to see how things worked then.

Once Jane gets to court, first serving Katherine of Aragon, then Anne Boleyn, we get a good viewing of what life was like back then. I was amused by Jane’s naivety sometimes but was also irritated in some moments. I also found Sir Francis Bryan trying to woo her as a bit odd. But, that was court life. A young, unattached woman with access to the Queen? Always a draw for this hoping to reach high levels.

It was interesting to get an idea of how Jane may have felt about the swiftness of her courtship with the King and how fast Anne had her downfall. There are moments where Jane really pondered her part in the whole thing and it was easy to feel sympathy for her. At least I did.

We, of course, know what happens to Jane, so I won’t bore you with that. But I think you’ll be surprised that you will see more to ‘Plain Jane’ than you thought.

This book has made Jane rise like her personal device, a phoenix. We often dismiss her for being plain and otherwise useless but I think Jane Seymour is quite admirable, given how she risked her neck for trying to save the monestaries, people in the tower as well as trying to reconcile Henry and the Lady Mary.

Sometimes, it’s the quiet ones who really surprise us all.