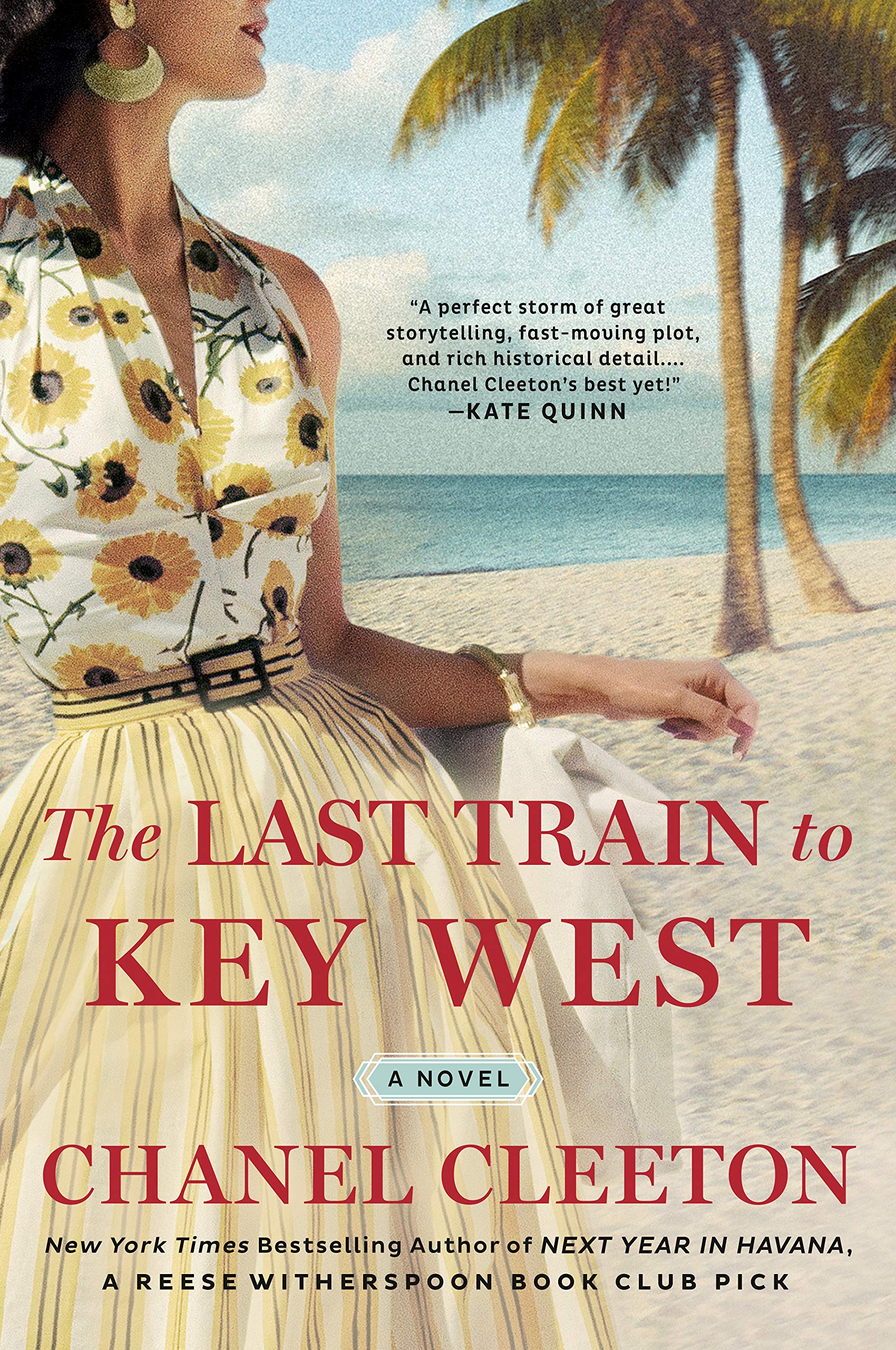 One of Bustle’s Most Anticipated Books of Summer 2020

“Cleeton’s beach reads are often lit by the sun of places like Florida and Cuba, and her latest doesn’t disappoint.”—OprahMag.com

In 1935 three women are forever changed when one of the most powerful hurricanes in history barrels toward the Florida Keys.

For the tourists traveling on Henry Flagler’s legendary Overseas Railroad, Labor Day weekend is an opportunity to forget the economic depression gripping the nation. But one person’s paradise can be another’s prison, and Key West-native Helen Berner yearns to escape.

After the Cuban Revolution of 1933 leaves Mirta Perez’s family in a precarious position, she agrees to an arranged marriage with a notorious American. Following her wedding in Havana, Mirta arrives in the Keys on her honeymoon. While she can’t deny the growing attraction to her new husband, his illicit business interests may threaten not only her relationship but her life.

Elizabeth Preston’s trip to Key West is a chance to save her once-wealthy family from their troubles after the Wall Street crash. Her quest takes her to the camps occupied by veterans of the Great War and pairs her with an unlikely ally on a treacherous hunt of his own.

Over the course of the holiday weekend, the women’s paths cross unexpectedly, and the danger swirling around them is matched only by the terrifying force of the deadly storm threatening the Keys.

Chanel Cleeton is the New York Times and USA Today bestselling author of When We Left Cuba and the Reese Witherspoon Book Club pick Next Year in Havana. Originally from Florida, she grew up on stories of her family’s exodus from Cuba following the events of the Cuban Revolution. Her passion for politics and history continued during her years spent studying in England where she earned a bachelor’s degree in international relations from Richmond, the American International University in London, and a master’s degree in global politics from the London School of Economics and Political Science. Chanel also received her Juris Doctor from the University of South Carolina School of Law. She loves to travel and has lived in the Caribbean, Europe, and Asia.

THE LAST TRAIN TO KEY WEST is a perfect storm of great storytelling, fast-moving plot, and rich historical detail. Lush, tropical, thirties-era Florida provides a hypnotizing backdrop as a battered wife, a runaway debutante, and a gangster’s bride find their lives intersecting in the face of a terrifying hurricane. Tense, tight, and atmospheric, this may be Chanel Cleeton’s best yet!

In her latest tantalizing novel, Chanel Cleeton explores the intersecting lives of three women seeking their place, and true selves, in a country upended by the First World War. With a treacherous hurricane looming, The Last Train to Key West takes the reader on a tumultuous ride bursting with romance, secrets, and unrelenting hope. A wonderfully transportive summer read!

—Kristina McMorris, New York Times bestselling author of Sold on a Monday and The Edge of Lost

As one of the largest storms in Florida’s history approaches the Keys, three young women, each with a secret, are entangled in new relationships and old debts amid the rising waters. Pregnant Helen is thinking of leaving her abusive husband, while newlywed Mirta has a contract marriage with a mobster. Elizabeth is searching for a mystery man in one of the WWI veterans’ work camps in Florida. All of them are achingly vulnerable against the backdrop of the coming storm. Brimming with secrets, hope, and love, this is a book that you’ll devour in one sitting (like I did!).

Chanel Cleeton’s beach reads are often lit by the sun of places like Florida and Cuba, and her latest doesn’t disappoint.

Chanel Cleeton simply never disappoints! Cleverly constructed and expertly delivered, THE LAST TRAIN TO KEY WEST is a feast for readers across multiple genres. This book has it all – great characters, a compelling historical backdrop, quests for love and purpose and refuge, and a fully satisfying conclusion that will have you cheering.

— Susan Meissner, bestselling author of THE LAST YEAR OF THE WAR

The Last Train to Key West takes you on an incredible and emotion-charged journey through the lives of three women facing a catastrophic hurricane that changes them forever – and shows them how courageous they really are. This book has everything a reader could want: not one but three incredible love stories, page-turning drama and rich historical detail. I finished the last chapter with a sigh of satisfaction that only a great book can bring about.

Cleeton finds the right balance of historical detail and suspense, making this a riveting curl-up-on-the-couch affair.

Cleeton’s depiction of the catastrophic hurricane is both gripping and terrifying, and she skillfully balances each woman’s internal growth with the various romantic subplots. Fans of Cleeton’s previous books, as well as readers who enjoy Beatriz Williams’ historical fiction, will devour this exciting, romantic tale.

…the historical events are riveting. Cleeton’s strength is in exploring the lives of women longing to push back against restrictive social expectations, but portions of the story dealing with the U.S. government’s treatment of World War I veterans are also extremely moving. … Cleeton should add to her growing fan base with this title, which is well suited for book clubs and for historical fiction fans of authors such as Renée Rosen and Susan Meissner.”

THE LAST TRAIN TO KEY WEST by Chanel Cleeton is a gorgeously written, absorbing novel set against the backdrop of a real, devastating hurricane in the Florida Keys in 1935. Cleeton masterfully weaves the stories of three very different and beautifully drawn women, all struggling to survive in their own ways with love, heartbreak, and ultimately resilience. An addictively good page-turner!”

— Jillian Cantor, USA Today bestselling author of The Lost Letter and In Another Time

Once again Chanel Cleeton has delivered a masterful story, filled with twists and turns as the lives of three courageous women intersect on a hurricane’s destructive path.  In their quest for survival, each one comes face to face with the force of nature and the force of love. THE LAST TRAIN TO KEY WEST is a remarkable work of historical fiction that grabs hold of your heart and is guaranteed to keep you turning pages!

As turbulent as the Labor Day hurricane itself, The Last Train to Key West weaves a gripping tale of survival and strength when three women are forced to ride out one of the most powerful storms in history. Lush, atmospheric, and suspenseful, Chanel Cleeton’s latest is not to be missed!

Chanel Cleeton is known for her stories of strong women in exotic, historical settings forging their way into futures of promise. THE LAST TRAIN TO KEY WEST is no exception, and all its romance, intrigue, and suspense make it impossible to put down. Gripping!

The Last Train to Key West is another exceptional story by Cleeton, who has quickly become a favorite among historical fiction fans. When the lives of three women from vastly different circumstances intersect even as the winds from the ocean threaten devastation, secrets are exposed, love is questioned and new life emerges even as others are in danger. Cleeton has fashioned a story that is gripping, romantic, and packed with drama. Readers will be up late eager to find out what happens!

Next Year in Havana  ||  When We Left Cuba