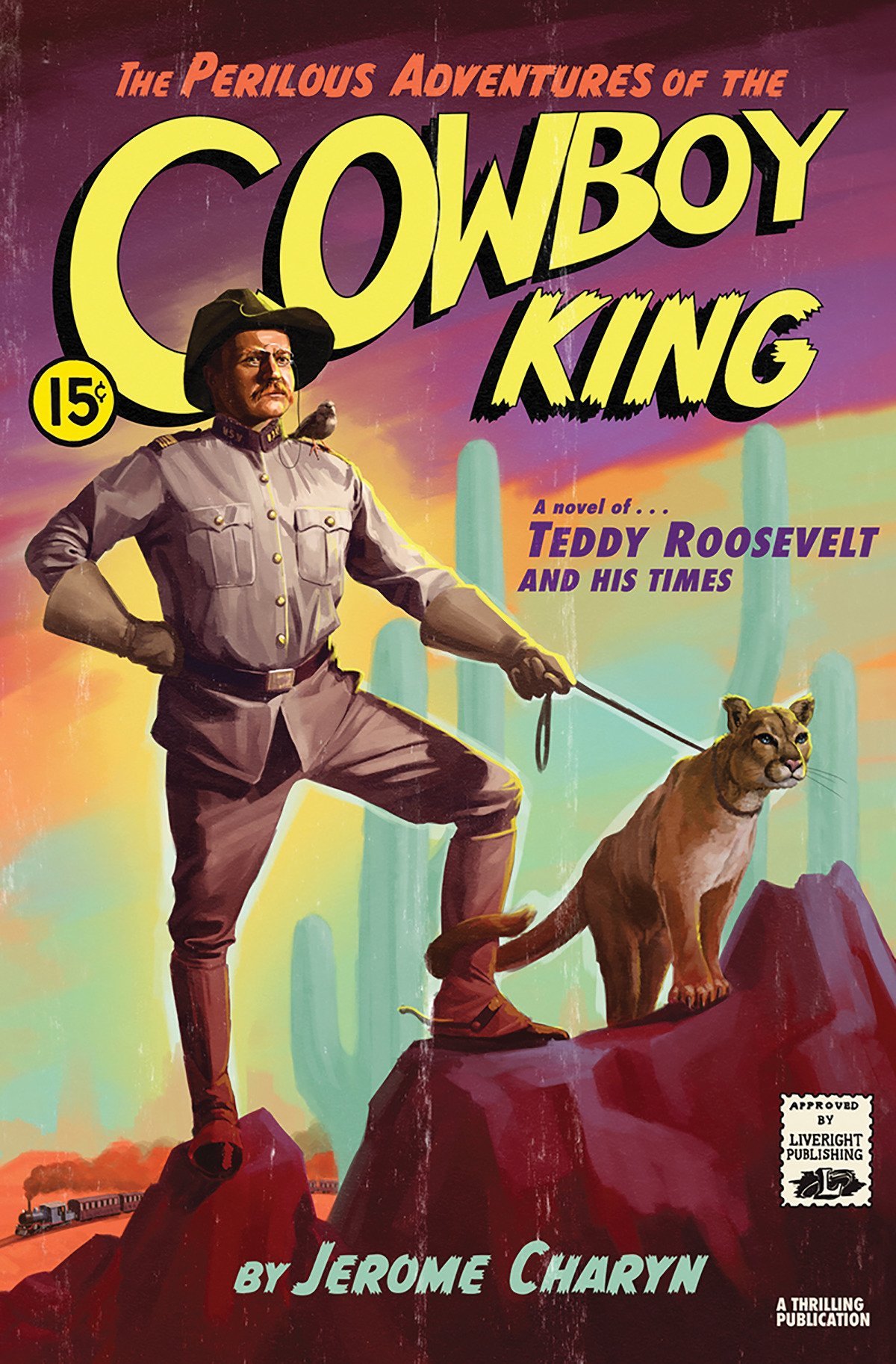 “Charyn, like Nabokov, is that most fiendish sort of writer―so seductive as to beg imitation, so singular as to make imitation impossible.” ―Tom Bissell

Raising the literary bar to a new level, Jerome Charyn re-creates the voice of Theodore Roosevelt, the New York City police commissioner, Rough Rider, and soon-to-be twenty-sixth president through his derring-do adventures, effortlessly combining superhero dialogue with haunting pathos. Beginning with his sickly childhood and concluding with McKinley’s assassination, the novel positions Roosevelt as a “perfect bull in a china shop,” a fearless crime fighter and pioneering environmentalist who would grow up to be our greatest peacetime president.

With an operatic cast, including “Bamie,” his handicapped older sister; Eleanor, his gawky little niece; as well as the devoted Rough Riders, the novel memorably features the lovable mountain lion Josephine, who helped train Roosevelt for his “crowded hour,” the charge up San Juan Hill. Lauded by Jonathan Lethem for his “polymorphous imagination and crack comic timing,” Charyn has created a classic of historical fiction, confirming his place as “one of the most important writers in American literature” (Michael Chabon).

I think that Theodore Roosevelt, who died 100 years ago today, is quite possibly one of the best presidents we ever had and one of the most fascinating men. As a child, I was often sick due to being asthmatic and having allergies that just wouldn’t quit. I always felt that I would never do anything fun because I had asthma. It was my mother who informed me, “Theodore Roosevelt had asthma.” A strange thing to say to a child, but I was a child who was utterly enthralled with reading about Presidents. Theodore became something of a personal hero to me. I have always wanted to read a fictional take on his adventures. His was a life that begged to be written about.

My wish came true, you guys. Because I happened to see this cover and I could not help but feel excited. I have featured Mr. Charyn before with his book, “I Am Abraham.” (Click to read the review, if you like.) He is a brilliant writer and I knew Teddy was in safe hands. I was not at all disappointed.

No, I lie. I found it too short. That is my sole complaint. But I have hopes for a sequel since this only covers the first half of Theodore’s life, but honestly, what a life. We go from his youth all the way to when President McKinley was assassinated. That would be where the second half–if there is one–picks up. (And I hope it does.) Despite his being so wealthy, I was always struck by how he cared so much about the common man when he did things. He knew his privilege and he did his best to not lord it over anyone; much like his father before him. He went from an assemblyman, where he took on Tammany Hall–aka, all things corrupt. During this time, he married, only to lose her and his mother on the same day.

Unable to really deal, he goes West and leaves his infant daughter with his sister. When he returns, he runs into his childhood sweetheart, whom he marries. It is not a spoiler to say that they remained married for the rest of his life. Once more, he is drawn to politics where he becomes the bull in a china shop, basically, that we know him to be. He does not relent in how hard he works and drives everyone mad and they send him to Washington, where he became Secretary of the Navy. It’s a position that allows him to push for war in Cuba against Spain, and where the Rough Riders came to be. (Tired yet, ya’ll?) And from there…Teddy becomes the New York State Governor. I forgot to mention that he was, at one point, the police commissioner.  His stint as governor led him to be Vice President and then…you already know.

I can’t tell you how much I really enjoyed this, though I’m sure you can tell. This is definitely a four star for me.

Would YOU like a copy of this book?! Let’s do a giveaway. Just LEAVE A COMMENT below and I will pick a winner. Please let me know your Twitter handle or e-mail, if you’re comfortable.  😀

Jerome Charyn is an award-winning American author. With more than 50 published works, Charyn has earned a long-standing reputation as an inventive and prolific chronicler of real and imagined American life.

Pulitzer Prize-winning novelist Michael Chabon calls him “one of the most important writers in American literature.” New York Newsday hailed Charyn as “a contemporary American Balzac,” and the Los Angeles Times described him as “absolutely unique among American writers.”

Since the 1964 release of Charyn’s first novel, Once Upon a Droshky, he has published thirty novels, three memoirs, eight graphic novels, two books about film, short stories, plays, and works of non-fiction. Two of his memoirs were named New York TimesBook of the Year.

Charyn’s most recent novel, Jerzy, was described by The New Yorker as a “fictional fantasia” about the life of Jerzy Kosinski, the controversial author of The Painted Bird. In 2010, Charyn wrote The Secret Life of Emily Dickinson, an imagined autobiography of the renowned poet, a book characterized by Joyce Carol Oates as a “fever-dream picaresque.”

4 thoughts on “The Perilous Adventures of the Cowboy King: Tour Kickoff!”