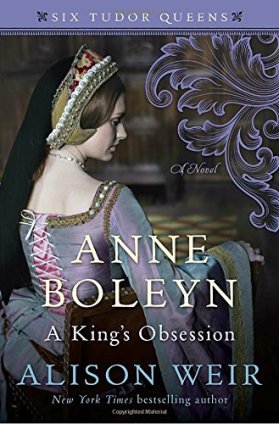 In continuing with Ms. Alison’s Weir’s Tudor Queen series, I can’t tell you how excited I was for this one in particular. Anne Boleyn is one of my favorite historical figures. I thought this would be a fantastic read.

My friends….I could not have been more wrong. I seldom give up on a book. But this one defeated me. For as much love as Ms. Weir has for Queen Catherine, her disdain for Anne was readily apparent from almost the first page. I understand she is writing about all six wives, but try to hide your dislike!

Some shy away from reviewing a book that they haven’t finished, but I think it’s worth sharing my thoughts. I do enjoy Ms. Weir’s books usually but not this time. It’s fair to say that I’m actually annoyed that such a renowned historian would be blatantly biased.

Let’s begin by saying, I did actually like reading about Anne’s years abroad, where she learned the manners and grace that made her so famed and sought after. There’s never really been a description of that in any books and so it was interesting to get a view of that and to know what her life was like abroad. Margaret of Austria wrote to Sir Thomas Boleyn of Anne, “so presentable and so pleasant, considering her youthful age, that I am more beholden to you for sending her to me, than you to me.” I enjoyed that greatly. It gave me more of an insight into Anne’s youth, which is something I’ve been left to wonder about. Beyond that, it went to hell quickly.

I was kind of in awe that rape is mentioned pretty willy-nilly in this. It’s insinuated that George Boleyn, Anne’s brother, is a rapist. (And even though he told Anne, she kind of brushed it aside as if it were nothing.) There is nothing in history to support this. Ms.

Weir also brings up Mary Boleyn being raped. Twice! Once by King Francis I and the second by Henry VIII. Again, there is nothing to support this claim and it’s a shame that Ms. Weir fell into the ‘I don’t like you, so I will write terribly about you’ way of things. It was rather disgraceful, truth be told. Another strange thing is that Ms. Weir wrote of the Boleyn siblings having two elder brothers;  it’s well documented that Elizabeth Howard only had three children who lived to adulthood: Anne, Mary and George.

I’m all for creative license. I really am; make it interesting. Make it fun. But if you are writing ‘historical fiction’–be mindful of history. Impressionable readers may take falsehoods as absolutely truth.

Most of us have an idea of what Henry VIII was like; his life is quite well documented.

We know he could be charming as all get out and we also know how that could change as quickly as the wind blew. But in this, he was not at all the usual Henry. It’s an insult to his memory, truth be told. Henry is a love sick fool. Yes, he was in love with her–or lust–but he still tended to his everyday business and didn’t sit pining away like a besotted teenage girl. There’s no depth to him, he’s just the King and he wants Anne. He feels one dimensional and whether that changed as the book went on, I don’t know. If the beginning is any indication, then I’m glad I didn’t continue.

I suppose I’m spoiled by Margaret George’s book, ‘The Confessions of Henry VIII’, where Henry is so vividly described that he basically jumped out of the book. If you’re going to write about one of the most well known figures in British history, one would think that you’d really take him on and do him justice. He’s shown as being easily manipulated. Does Henry VIII look like a man who was easily manipulated?! And if you don’t go by his portrait, this is a man who signed death warrants on a regular basis. I don’t think so!

Ms. Weir also writes of Anne having a sixth finger and moles all over, which most seem to discredit. Henry was notoriously paranoid about these sort of things; if there was something unattractive about Anne, odds are he would not have been so besotted with her. Anne has been described as beautiful in a non-conventional way. Eustace Chapuys, one of Anne’s biggest detractors, would have jumped on the opportunity to write if Anne was deformed in anyway. Most of these rumors started long after Anne was dead; Nicholas Sander, a Catholic who had been exiled during Elizabeth I’s reign wrote that Anne “…had a projecting tooth under the upper lip, and on her right hand, six fingers.”

I could go on complaining about the bit I read, but I think you’ve gotten my drift. I did not enjoy much of this book and odds are, I’ll never pick it up again, even if it’s on discount when I head to Books-A-Million.

I don’t know if I’ll read the next one in the series, but I suppose we’ll see as time goes on.

Additional Notes:
Did Not Finish.

4 thoughts on “Anne Boleyn: The King’s Obsession [Kind of Review]”